Sorry for the extreme long  silence (one month). I have been crazy busy with work and then there is not that much to tell. But after a month I think I can fill a blog somewhat again. And I had two days off in which I spend one day driving around, so I have also some pictures to share :) http://albumizr.com/a/JS0

Unfortunately I did not find my sealegs. I have been on boats before in rough weather years before without problems, so I didn't understand why I got sick all the time now. And every time it got worse. The last time on the boat it was actually extremely calm. Like no waves at all. And I was still feeling like crap. The only think I can think off is that my meds are messing with my head. So I told my boss, do what you need to do, but I am not going back on that boat. I felt like such an idiot. You are trying to help the puking tourists and ten minutes later you are standing next to them. Also I am not able to help the other guides with everything that needs to be done on the boat. I first asked my boss if he could keep me from guiding on the boat so I could try to get used to it, but apparently that wasnt possible. So luckily for me, he has decided he has enough work for me at reception and I can also still work as a guide in the museum. So I still have enough work to do, I did feel like a complete loser for a moment and it still is disappointing sometimes, but I like the work mostly and at least it is Norwegian work experience. So since I am not on the boat and my hours are very irregulat, I am trying to make as much money as I can. One of the things which people request is a dogsitter for when they are on the boat. So far I have been able to take care of 5 dogs, all of them adorable:) 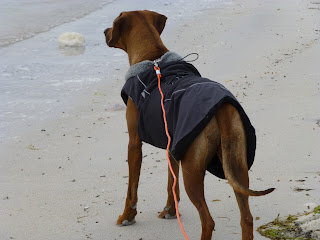 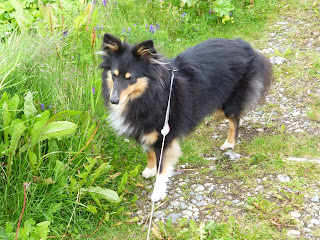 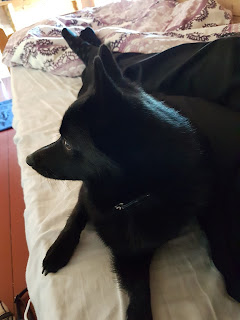 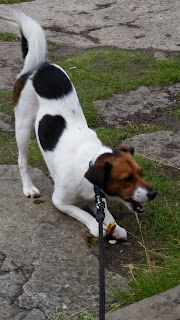 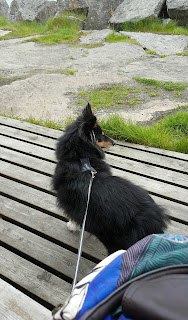 From the 4th of August I will be working reception fulltime again until the 14th of September. Time flies. I am already half way through my stay here. So I also tried to figure out how to stay here after I am done with this job. To apply for "dagpenger", norwegian unemployment benefits, I need a form from the Dutch social services that indicates how long I have worked in the Netherlands and how much I have made in the last three years. I first applied for this form before I went to Norway, but since I was still getting dutch unemployment benefits they couldnt (or wouldnt) process my request. So in June I applied again. A couple of weeks ago I finally got my form, but of course, the data was incomplete. They only gave me the salary of my last job, while in their own footnotes it says that for Norway you have to give one or three years, Since I indicated in my request I needed three years I would expect to get the requested information. So after I called them they let me know I should send an email. As a response to my email I received a message that they viewed my email as a complaint and it needed a signature.... So after cooling down from being very very angry at these idiots, I send in an official complaint. Now they send the confirmation of my complaint with the response that they will give me my results before the 3rd of November, which is about 5 MONTHS after i applied, and 2 MONTHS after I lose my job here..... This is driving me nuts!!!! So, if you plan to move here and you dont have a job yet. prepare for the bureaucratic bullshit! And this is only from the Dutch part. I havent even applied for the dagpenger yet, and I think Norway is probably also very good in trying to disuade you from getting money. But I will persevere (or find a job).

But besides this crapfest, I also had some fun. I finally had some days off while one of them was nice weather! So I rented a car (they charged my creditcard twice, so also complaining to them.... aarrghh) but anyway. I had a car and just decided to drive south. I was here years ago with my sister and not that impressed with the Lofoten then. But maybe it is the fact that it was FINALLY sunny, or I have changed, but I loved this trip. It was soo nice to just drive around and have no obligations. I loved the mountains and nature and had fun. I accidentily went I little off road, but I didnt get stuck and I love this kind of driving. I think I might need a 4WD when I ever get a car. I had no GPS so I decided to just drive round the island, but the road turned into gravel and then into mud... by the time it got really bad I was already on the road for quite some time and I expected it would turn to normal road any second now :) But it was immensely fun. Back home I showed my colleguage on the map where I had been and it clearly said on the map <Not suitable for driving> :)

I also tour the lighthouse here sometimes, and the view is very nice, the climb up is quite exhausting, so when you are asked to do it four times in a day, it is really tirying, but good for my physicial shape :) One group also wanted to go up during midnight to see the midnight sun (if you ever are here, since it is summertime, the midnight suns lowest point is I think at 1.00 not 0.00. But anyway.) Since the midnight sun was almost gone then, it would go very low to the horizon and create nice sunset colors (midnight sun ended yesterday). But since we are here, the weather decided to put one big cloud in front of the sun. The rest of the sky was lovely and blue, except in front of the sun....

I still had fun though :) So just two more months left, a lot of bureaucratic bullshit to go through, and I need to keep applying for work, but I am enjoying myself, especially when the weather is nice. This week I have two days off again, so I am hoping again for nice weather. I might go do a puffin safari or climb on of the mountains here... See if all that lighthouse climbing has prepared me for that already.
Posted by Unknown at 10:32 AM